According to Emma Discher with the Advocate, the colorful sunset that was on display in the Baton Rouge area Monday night was caused by dust blown across the Atlantic Ocean from the Sahara Desert, a local meteorologist says.

Wind blows the dust nearly 5,000 miles from the desert to the gulf coast during the summer months, creating a Saharan air layer, said National Weather Service meteorologist Bob Wagner. The light then reflects through the dust particles, brightening sunsets and sunrises.

“Across the northern portion of Africa the winds are out of the east at this time of year and it picks up dust from the Sahara and lifts it to the high levels of the atmosphere,” Wagner said. “That dust gets carried westward across the Atlantic Ocean into our area. The dust is at very high levels like 30 or 40,000 feet.”

In addition to providing beautiful sights, the dust layer may also deter the formation of tropical storms and hurricanes, Wagner said.

“It may aid somewhat in lowering the chances of tropical storms and tropical hurricanes when you’re underneath it,” Wagner said. “Because you’re not getting quite as much heating on the surface plus the air associated with the layer is rather dry.”

The dust may cause some respiratory irritation for some sensitive groups, according to a National Weather Service post out of Texas. 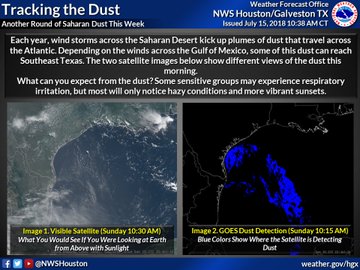 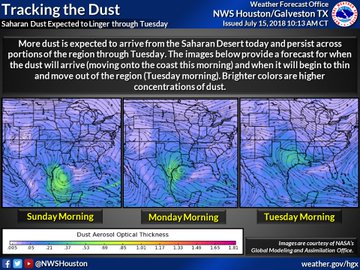 The plume, which is also hovering over Texas, may contribute to record high heat in areas of Texas this week, according to a USA Today report. Atlanta-based meteorologist Ryan Maue tweeted how the dust layer could contribute to that.

“Combined with oppressive heat, the air quality will be like experiencing the desert itself,” Maue tweeted.